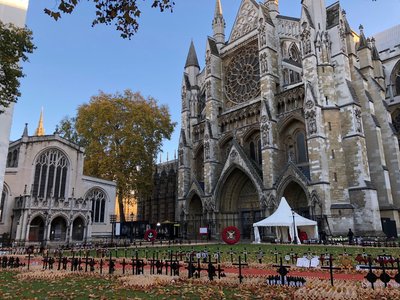 Vista were represented at the Westminster Remembrance Service by Roy-Anthony Birch, a member of the Leicestershire & Rutland Western Front Association (WFA) and Local Representative for The War Memorials Trust. The following is his take on the need for remembrance and the work done post-world war one by and for those servicemen and women who lost their sight during in the conflict.

I was delighted and indeed honoured to be asked to represent Vista at the national Service of Remembrance and Thanksgiving in Westminster Abbey on Sunday November 11th 2018.  As a visually-impaired person myself, I am especially keen that we remember and pay tribute to those blinded by war, not only during the two World Wars, but during conflicts in our own time.  Many will doubtless recall images of lines of blinded soldiers from the 1914-18 War being led by a sighted guide, often a hospital orderly, each with a hand on the shoulder of the man in front, making their way from Casualty Clearing Stations en route to embarkation for “Blighty”.

Leicester would have had its own compliment of “war blinded”.  Vista’s predecessor, The Royal Leicestershire & Rutland Society For The Blind, would almost certainly have given employment to some in its Margaret Road Workshops in North Evington, offering these men something of a sense that all had not been lost.  One of the most inspiring examples among the veterans I have discovered during my research is of a man who I’m sure wouldn’t have seen himself as a “victim” of The First World War but, on the contrary, seemed determined to play as full a part as possible in society in spite of his perceived “disabilities”.  This was Walter Goding “late of His Majesty’s Army, British Expeditionary Force, France, who was wounded in action four times, blinded in both eyes, and suffered from shell shock”.  Undeterred by his injuries, Mr Goding acted as a collector for wounded servicemen during the final months of the War and beyond, and as a fund-raiser for what was then The Wycliffe Society For Helping The Blind; an organisation long-since absorbed into present-day Vista.

Walter Goding undoubtedly “did his bit” in honouring his World War 1 comrades, just as today we play our modest part in honouring the service and sacrifice of the Fallen of both World Wars and of subsequent conflicts; women as well as men; civilian as well as military.  Such thoughts should be ever in our hearts and in our minds as we plant a miniature wooden cross or lay a wreath or wear the scarlet poppy “In Thankful Remembrance of Them”: not only in 2018, while marking the Centenary of The Armistice, but in each of the years to come.